Ages ago, in prehistoric computer times, before Apple fully realized its uber-technological prowess and took over the world with touchy glass devices, I was enamored with a one Commodore Amiga. To this day I lament that Amiga isn’t giving Apple competition, as it was way ahead of its time with multitasking and distributing tasks to multiple processors, as well as just feeling like a creative machine. I mean, c'mon, it had B52/ROCK LOBSTER 1 stamped on the circuit board! One thing I used a lot, and could never figure out why OS X had no equivalent, was a dual-pane file manager. It took ten years, but there are finally some very solid options out there.

Since the early announcement of ForkLift, I have kept a close eye on the development, and have helped with various stages of beta testing. Along with TextMate, ForkLift has been in my daily workflow for years now. It’s incredibly fast, reliable, and does just about everything I need from local and remote file management. I couldn’t imagine working without it at this point. Yesterday they released the first public beta of ForkLift 2, a huge upgrade to the already-capable 1.7. 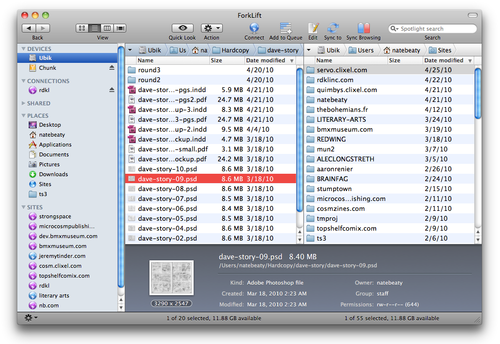 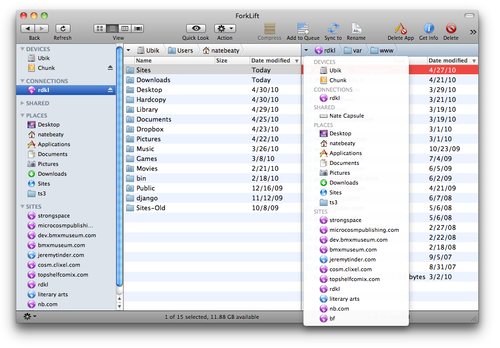 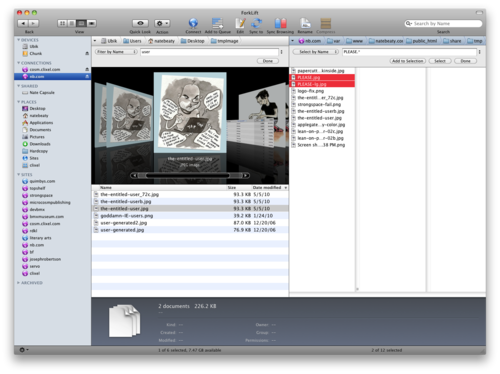 The list of new features in Forklift 2 is impressive:

Last week, Panic released Transmit 4, which is a gorgeous and capable superpowered FTP application, and also now allows you to have both panes showing local drives. I have a registered copy of Transmit 3 and used it before ForkLift came along, and still use it now and then for certain FTP servers that gave the old FL engine trouble.

I spent a few days playing around with the new Transmit, and strangely the first impression I get is ForkLift Lite. However it is, in true Panic form, a very beautiful and well-thought-out product with some interesting UI decisions.

I couldn’t help comparing it to the beta of FL2: 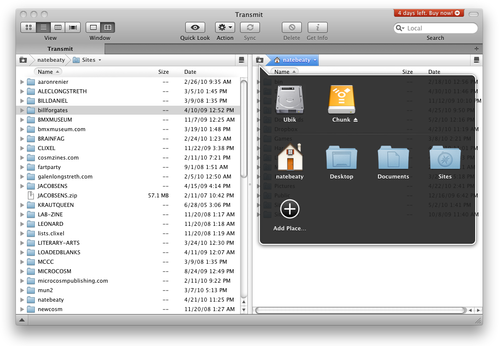 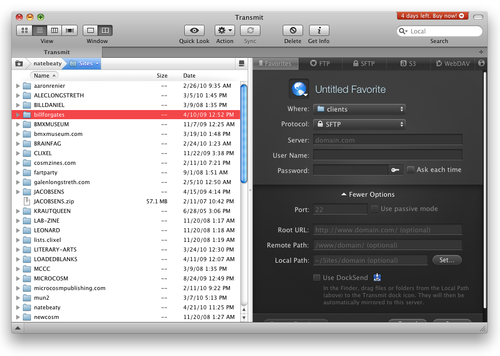 Overall, Transmit 4 is a very nice upgrade, but to me it really feels like a very pretty FTP app with limited functionality. In comparison, ForkLift feels much more powerful and useful, less expensive, and has all the features I’d ever use in Transmit.

I don’t discount the appeal of nice aesthetics and a few tasteful visual flourishes. Folks spend a LOT of time in these type of apps, and having a bit of fun and whimsy goes a long way. I think FL2 could use just a few more brushstrokes to pretty it up, but I’m already using it for production use and love it to death. I’m sure they’ll refine it quite a bit, it’s only in the first public beta after all.

I’d be remiss to not mention Path Finder, especially since they somewhat-recently added the ability to operate with dual panes. For me, however, Path Finder has always felt like the epitomy of bloatware, trying to cram every feature imaginable into one app. Because of that, you get giant lists of tiny-font actions and options, floating panes shooting off every edge of the window, and more opportunity for instability. Some folks swear by it, but it’s never wooed me like ForkLift did from the start.

If I had to recommend one to someone less technical for just uploading files to their website, I’d have a hard time deciding. Transmit errors on the side of pretty and simple, primarily sticking to the paradigm of “local files on left, remote site files on right.” ForkLift 2 leans more towards a power user setup, and expects one to be able to handle the flexibility and extra features with less hand-holding. For me, the latter wins out by a long shot, and if you’re more geek than weak, I’d suggest giving ForkLift a spin.